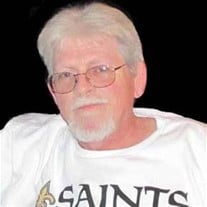 Gary L. Blevins, 58, of Konnarock, VA passed away on Wednesday, April 12, 2017 in the Johnston Memorial Hospital, Abingdon, VA. He was born in West Chester, PA. on January 8, 1959, a son of the late Thomas Lawrence Blevins and survived by his mother, Jessie Riffey Blevins of Konnarock, VA. In addition to his father, he was preceded in death by his wife, Mary Sue Greer Blevins. He had lived in Manassas, VA before moving to Konnarock, VA in 1970. He retired from Royal Moldings in Atkins, VA. Gary loved watching football and was a huge New Orleans Saints fan. He was a member of Azen Baptist Church. In addition to his mother, he is survived by three children, Brandy Blevins Trent and her husband, Aaron, of Abingdon, VA, Stacey Boehme and her husband, Timothy, of Abingdon, VA, and Tyler Shane Blevins of Damascus, VA; three grandchildren, Ethan Trent, Nick Boehme, and Nate Boehme; one sister, Greta Powers and her husband, Kelly, of Konnarock, VA; a sister-in-law, Linda Sharpe and her husband, David, of Fries, VA; a niece, Karla Powers Blevins; and three nephews, Kelly Powers, Jr., Brian Sharpe, and Darrell Robinson. The family will receive friends from 5:00 PM until 6:45 PM Saturday, April 15, 2017 at Garrett Funeral Home. The funeral service will follow at 7:00 PM Saturday in the Riverview Chapel at Garrett Funeral Home with Pastor Jimmy Lundy and Pastor Robert Blevins officiating. The committal service and inurnment will be conducted at 1:00 PM Wednesday, April 19, 2017 at Azen Cemetery in Konnarock, VA. Condolences for the family may be sent and viewed by visiting www.garrettfuneralhome.com. Mr. Blevins and his family are in the care of Garrett Funeral Home, 203 N. Shady Avenue, Damascus, VA 24236; ph.#: (276) 475-3631.

Gary L. Blevins, 58, of Konnarock, VA passed away on Wednesday, April 12, 2017 in the Johnston Memorial Hospital, Abingdon, VA. He was born in West Chester, PA. on January 8, 1959, a son of the late Thomas Lawrence Blevins and survived by... View Obituary & Service Information

The family of Gary L. Blevins created this Life Tributes page to make it easy to share your memories.