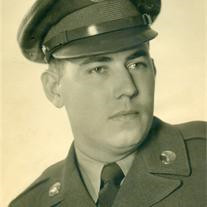 Frederick William “Bill” Reedy, age 84, of Konnarock, Virginia, passed away Friday, February 4, 2011 at Indian Path Medical Center in Kingsport, Tennessee. He was a native of Washington County, Virginia and was a son of the late Morgan and Mae Reedy. He had lived in Silver Springs, Maryland for several years prior to moving back to Washington County, Virginia in 1976. He was a veteran of the U.S. Army, where he had served in Germany for three and a half years. Mr. Reedy retired in 1991 from Abingdon Steel Fabrication Company and was a member of the Konnarock Seventh-Day Adventist Church. In addition to his parents, he was also preceded in death by his wife, Eloise C. Reedy; one sister, Fern Severt; and three brothers, Ernest Reedy, Elmer Reedy, and Blaine Reedy.  He is survived by one son, James M. Reedy of Damascus, Virginia; one step-granddaughter, Sandra Chauncey; one step-great granddaughter, Alex Chauncey; one sister, Maxine Brewer and her husband, Glenn, of Forestville, Maryland; one brother, Ralph Reedy and his wife, Flora, of Konnarock, Virginia; and several nieces and nephews.  The funeral service will be conducted at 8:00 P.M. Monday, February 7, 2011 in the Riverview Chapel at Garrett Funeral Home with Rev. Fred Parker officiating. The committal service and interment will be at 11:00 A.M. Tuesday, February 8, 2011 at Jackson-Lewis Cemetery in Taylor Valley, Virginia with the Highlands Veterans Honor Guard and Virginia National Guard Honor Guard conducting military graveside rites. In lieu of flowers, the family requests memorial contributions be sent to the Mt. Rogers Volunteer Fire and Rescue Squad, P.O. Box 47, Whitetop, VA 24292. The family will receive friends from 6:00 P.M. to 7:45 P.M. Monday prior to the funeral service at the funeral home. Online condolences may be sent to the family and viewed by visiting www.garrettfuneralhome.com. Mr. Reedy and his family are in the care of Garrett Funeral Home, 203 N. Shady Avenue, Damascus, VA 24236, 276-475-3631.

Frederick William “Bill” Reedy, age 84, of Konnarock, Virginia, passed away Friday, February 4, 2011 at Indian Path Medical Center in Kingsport, Tennessee. He was a native of Washington County, Virginia and was a son of the late Morgan and... View Obituary & Service Information

The family of Frederick Reedy created this Life Tributes page to make it easy to share your memories.