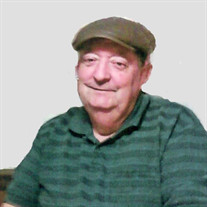 Franklin "Lee" Crabtree, 72, of Damascus, VA passed away on Saturday, July 25, 2020 at Johnston Memorial Hospital in Abingdon, VA. He was born in Marion, VA on May 13, 1948, a son of the late Curtis Crabtree and Beulah Pennington Crabtree. In addition to his parents, he was preceded in death by one brother, Hubert Crabtree. Lee was a resident of Damascus, VA for many years and was a member of Wright's Chapel United Methodist Church. He was a loving and devoted husband, father and grandfather. He graduated from Virginia Highlands Community College with an associates degree and was a jack of all trades and a master of bad jokes. Lee worked countless jobs throughout his life but mostly enjoyed his work as a Maintenance Supervisor at Hampton Inn where he received the Spirit of Hampton award for all his time and dedication for the 13 years he worked there. He spent most of his time by cutting deals at the flea market, finding new places to go out and eat, coaching little league and spending time with his family. Most importantly, Lee enjoyed watching all of his grandchildren at their sporting events and letting the officials know his opinions on their calls. He was Holston High School's biggest fan. Lee is survived by his loving wife of 49 long years, Freda Anne Richardson Crabtree; two sons, Eric Lee Crabtree and wife Kelly of Damascus, VA, and Timothy "Tim" Austin Crabtree of Damascus, VA; three grandsons, Austin Lee Crabtree and fiancé Abby, Ethan Norris, and Randy Norris; two granddaughters, Erica Ann Crabtree and Kaylie Jade Crabtree; one honorary grandson, Liam Noah the love of his life; and four special friends, Donny Baker, Linda Baker, Rob Bare, and Donny Edwards. The family would like to express a special thank you to Nurse Andy Levendosky for all the love and care shown to Lee during the last few hours of his life. The family will receive friends from 2:00 PM until 4:00 PM on Saturday, August 8th 2020 at Garrett Funeral Home. The funeral service will follow at 4:00 PM in the Riverview Chapel at Garrett Funeral Home with Pastor Prue Oxendine and Pastor Robert Blevins officiating. The service will be live streamed on the Garrett Funeral Home Facebook page starting a few minutes prior to the service, https://www.facebook.com/garrett.funeralhome. Pallbearers will be Austin Crabtree, Eric Crabtree, Tim Crabtree, Darren McBride, Joe Richardson, Rick Richardson, Rob Bare and Donnie Edwards. Honorary Pallbearers will be all of the employees at Sundog Outfitter of Damascus, VA. In lieu of flowers, the family is requesting that donations be made out to St Jude Children's Research Hospital, 501 St. Jude Place Memphis, TN 38105 USA / [email protected] or to the Cemetery Fund at Wright's Chapel United Methodist Church, 33478 Widener Valley Road Damascus, VA 24236. Condolences for the family may be sent and viewed by visiting www.garrettfuneralhome.com. Mr. Crabtree and his family are in the care of Garrett Funeral Home, 203 N. Shady Ave., Damascus, VA 24236; ph. #: (276) 475-3631.

Franklin "Lee" Crabtree, 72, of Damascus, VA passed away on Saturday, July 25, 2020 at Johnston Memorial Hospital in Abingdon, VA. He was born in Marion, VA on May 13, 1948, a son of the late Curtis Crabtree and Beulah Pennington Crabtree. In... View Obituary & Service Information

The family of Franklin Lee Crabtree created this Life Tributes page to make it easy to share your memories.

Franklin &quot;Lee&quot; Crabtree, 72, of Damascus, VA passed away on Saturday,...

Send flowers to the Crabtree family.