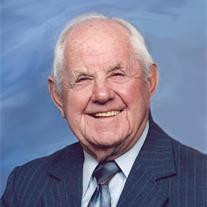 Franklin Mitchell "Bud" Sturgill, age 84, of Chilhowie, Virginia, passed away on Monday, June 12, 2006 at his residence. He was a native of Washington County, Virginia, and had lived in Kalamazoo, Michigan for twelve years before moving to Smyth County, Virginia in 1972. He was a veteran of the U. S. Army during World War II and had received the Purple Heart and various other medals and ribbons. He retired from Brunswick Corporation and spent his later years farming. Mr. Sturgill was a member of the V.F.W. in Marion, Virginia, and was a member of the Chilhowie Baptist Church, where he was very active in Sunday school and special projects. He was preceded in death by his wife, Wadie Shumate Sturgill; his parents, Ulla Vinton "Ike" and Mayme Ida Sturgill; one son, Winston Chesil Sturgill, and one sister, Clyde Evelyn Wohlford. He is survived by two sons, Theodore Mitchell "Ted" Sturgill and Carol, of Damascus, Virginia, and Douglas Harley Sturgill and Jean, of Ashville, North Carolina; three sisters, Norma McClure, of Chilhowie, Virginia, Naomi Phillips, of Konnarock, Virginia, and Delores Trivett and her husband, Juston, of Macon, Georgia; three brothers, Harley Sturgill and his wife, Barbara, of Longwood, Florida, French Sturgill and his wife, Evelyn, of Chilhowie, Virginia, and Nick Sturgill and his wife, Eva, of Damascus, Virginia; seven grandchildren, two great grandsons, and several nieces and nephews. The funeral service will be conducted at 11:00 A.M. Thursday, June 15, 2006, in the Chilhowie Baptist Church with Rev. Chuck Herrell and Rev. Bob Steele officiating. The committal service and interment will follow in the Konnarock Community Cemetery in Konnarock, Virginia, with the Highlands Fellowship Veterans Honor Guard conducting military graveside rites. Pallbearers will be Jim Blevins, Herbert Blevins, Eric McClure, Jerry McClure, Dwight Phillips, Allen Phillips, Keith Sturgill, Ernest Phillips and Lynn Pease. Honorary pallbearer will be Juston Trivett. In lieu of flowers, memorial contributions may be sent to the Cancer Outreach Foundation, 104 Abingdon Place, Abingdon, VA 24211. The family will receive friends from 7 - 9 P.M. Wednesday, June 14, 2006, at Garrett Funeral Home in Damascus, Virginia. Condolences may be sent to the family at www.garrettfuneralhome.com. Mr. Sturgill and his family are in the care of Garrett Funeral Home, 203 N. Shady Ave., Damascus, VA 24236, 276-475-3631.

Franklin Mitchell "Bud" Sturgill, age 84, of Chilhowie, Virginia, passed away on Monday, June 12, 2006 at his residence. He was a native of Washington County, Virginia, and had lived in Kalamazoo, Michigan for twelve years before moving to... View Obituary & Service Information

The family of Franklin Bud Sturgill created this Life Tributes page to make it easy to share your memories.