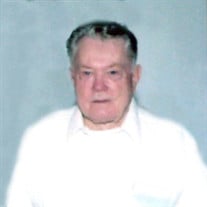 Floyd C. Wyatt, Sr., age 96, of Damascus, Virginia passed away on Friday, October 23, 2015 in the Valley Health Care Center, Chilhowie, Virginia. He was a life long resident of Damascus, Virginia and was a veteran of the U.S. Army during World War II. He was preceded in death by his wife, Ellen Morgan Wyatt; three daughters, Daisy Jane Wyatt, Anna Lee Widener, and Martha E. Belcher; and two brothers, Elmer Wyatt and Arlan Wyatt. He was a retired auto body repairman and was a member of Cornerstone Baptist Church. He is survived by his one daughter, Sally W. McVey and her husband, Jimmy, of Damascus, Virginia; two sons, Floyd C. Wyatt Jr. and his wife, Tammy, of Abingdon, Virginia and Donald R. Wyatt and his wife, Rebecca, of Abingdon, Virginia; one half-brother, Edward Trent of Damascus, Virginia; eleven grandchildren, eighteen great grandchildren, two great great grandchildren, and several nieces and nephews. The family will receive friends from 6:00 pm until 8:00 pm Monday, October 26, 2015 at Garrett Funeral Home. The funeral service will be conducted at 11:00 am Tuesday, October 27, 2015, at the graveside at Sunset Memorial Park, with Pastor Gary Blankenbeckle officiating. Online condolences for the family may be sent and viewed by visiting www.garrettfuneralhome.com. Mr. Wyatt and his family are in the care of Garrett Funeral Home, 203 N. Shady Avenue, Damascus, VA 24236; ph.#: (276) 475-3631.

The family of Floyd C. Wyatt Sr. created this Life Tributes page to make it easy to share your memories.

Send flowers to the Wyatt family.