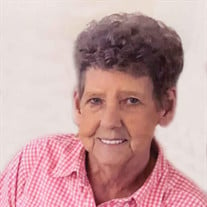 Evelyn "Ebby" Joyce Richardson, 77, of Taylors Valley, VA departed this world on Wednesday, October 10, 2018. Her destination being a mansion over the hilltop with many family and friends that have since passed. Evelyn, who was so lovingly known as "Nana" by many, leaves behind her true love James J. Richardson. Evelyn and James married 58 years ago and spent their honeymoon in a cherry tree. Never separated for long, the two enjoyed sitting on the porch swing listening to the birds and driving around "Sweetheart" their 1955 yellow Chevy truck. Evelyn and James lost their eldest child, Mark Richardson, on October 7, 2018. In addition to her husband, Evelyn leaves behind a daughter, Sherrie Garr (Terry), 6 grandchildren, 8 great grandchildren, her daughter-in-law, Beth Richardson, her older sister, Stella Dalton (Frank), and older brother, Arlee Tolliver (Shirley), and many others, including her dog Oreo. Evelyn also leaves behind her post as the world famous chocolate cake baker. She was a member of the Taylors Valley Christian Church for over 50 years where she played the piano. During football season, you could hear her rooting for the Tennessee Vols and in March the tv was always on an NCAA game. Evelyn could be heard whistling and humming a mile away, as well as spoiling any baby she could get her hands on. She was also an avid fisherwoman who was keen on teaching everybody to bait their own hook. Nana's homemade biscuits and gravy, chocolate oatmeal cookies, red kool-aid, sweet tea, and love will be unimaginably missed. Her smile and contagious laughter will forever be felt to those of us left behind. The family will receive friends from 2:00 PM until 4:00 PM Sunday, October 14, 2018 at Garrett Funeral Home. The funeral service will follow at 4:00 PM Sunday in the Riverview Chapel at Garrett Funeral Home with Mr. Maurice Widener and Mr. Gene Redden, ministers officiating. The committal service and interment will be conducted at 11:00 AM Monday, October 15, 2018 at Jackson-Lewis Cemetery in Taylors Valley, VA. Pallbearers will be selected from family and friends. Honorary Pallbearers will be the men of Taylors Valley Christian Church. In lieu of flowers, the family is requesting that donations be made to Taylors Valley Christian Church, P.O. Box 1035, Damascus, VA 24236. Condolences for the family may be sent and viewed by visiting www.garrettfuneralhome.com. Mrs. Richardson and her family are in the care of Garrett Funeral Home, 203 N. Shady Ave., Damascus, VA 24236; ph.#: (276) 475-3631.

Evelyn "Ebby" Joyce Richardson, 77, of Taylors Valley, VA departed this world on Wednesday, October 10, 2018. Her destination being a mansion over the hilltop with many family and friends that have since passed. Evelyn, who was so lovingly... View Obituary & Service Information

The family of Evelyn "Ebby" Joyce Richardson created this Life Tributes page to make it easy to share your memories.