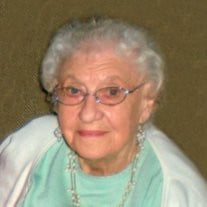 Ethel D. Campbell, age 89, of Damascus, Virginia, went to be with the Lord on Saturday, November 23, 2013 at Johnston Memorial Hospital in Abingdon, Virginia. She was a native of Washington County, Virginia and had lived in Damascus, Virginia most of her life. She was a daughter of the late Ira and Lennice DeBusk and a member of Sutherland Community Church. In addition to her parents, she was also preceded in death by two brothers, Harold DeBusk and Charles DeBusk and one sister, Opal D. Bryan. She is survived by one son, Paul D. Campbell and his wife, Joyce, of Shady Valley, Tennessee; two daughters, Rita C. Trent and her husband, Mike, of Damascus, Virginia and Kathi L. Mahala and her husband, Walt, of Abingdon, Virginia; one sister, Ruby D. Tinker of Daytona, Florida; 11 grandchildren, 16 great grandchildren, 6 great great grandchildren, and several nieces and nephews. The family will receive friends from 6:00 P.M. to 7:45 P.M. Monday, November 25, 2013 in the Riverview Chapel at Garrett Funeral Home. The funeral service will be at 8:00 P.M. Monday at the funeral home with Pastor Dave Allen and Pastor Mac Harr officiating. The committal service and inurnment will be at 2:00 P.M. Friday, November 29, 2013 in the Colonial Chapel Mausoleum at Forest Hills Memory Gardens in Abingdon, Virginia. In lieu of flowers, the family requests memorial contributions be sent to Damascus Volunteer Rescue Squad, P.O. Box 458, Damascus, VA 24236. Online condolences may be sent to the family and a memorial video tribute may be viewed by visiting www.garrettfuneralhome.com. Ms. Campbell and her family are in the care of Garrett Funeral Home, 203 N. Shady Ave., Damascus, VA 24236, ph.#: (276) 475-3631.

Ethel D. Campbell, age 89, of Damascus, Virginia, went to be with the Lord on Saturday, November 23, 2013 at Johnston Memorial Hospital in Abingdon, Virginia. She was a native of Washington County, Virginia and had lived in Damascus, Virginia... View Obituary & Service Information

The family of Ethel D. Campbell created this Life Tributes page to make it easy to share your memories.