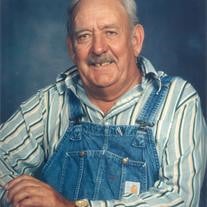 Ernest L. Rhymer, age 81, of Gainesville, Virginia, passed away on Tuesday, March 17, 2009 at his residence. He was a native of Washington County, Virginia and he lived most of his life in Fairfax and Gainesville, Virginia. He was a veteran of the U. S. Army having served during World War II. . He was owner and operator of Rhymer Trucking Company and also worked as a carpenter contractor. Mr. Rhymer was of the Baptist faith. He is survived by one daughter, Patricia Rhymer, of Gainesville, Virginia; one son, Ernest Rhymer, Jr., of Gainesville, Virginia; one sister, Merchie Pennington, of Marion, Virginia; and one brother, Billy Rhymer, of Konnarock, Virginia; and several nieces and nephews. The funeral service will be conducted at 8:00 P.M. Friday, March 20, 2009 at Garrett Funeral Home Chapel, Damascus, Virginia with Rev. Ronnie Blevins officiating. The committal service and interment will be at 11:00 A. M. Saturday, March 21, 2009 in the Azen Cemetery, Konnarock, Virginia. Honorary pallbearers will be Arland Taylor, Garland Taylor, Jerry Hayes, Benny Hayes, Bobby Fain, and Bobby Swain. The family will receive friends from 6:00 P. M. - 7:45 P. M. Friday, March 20, 2009 prior to the funeral service at Garrett Funeral Home. Condolences may be sent to the family and may be viewed by visiting www.garrettfuneralhome.com. Mr. Rhymer and his family are in the care of Garrett Funeral Home, 203 N. Shady Avenue, Damascus, VA 24236, 276-475-3631.

The family of Ernest Rhymer created this Life Tributes page to make it easy to share your memories.

Send flowers to the Rhymer family.