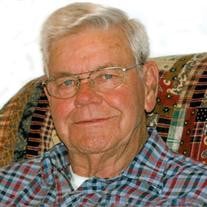 EDWIN “JACK” LEWIS, age 82, of Taylors Valley, Virginia passed away on Wednesday, June 2, 2010 at his residence in Howell, Michigan. He was born in Taylors Valley, Virginia on March 21, 1928. He graduated from Damascus High School and was a veteran serving in the U.S. Navy. He worked as a construction superintendent in Miami, Florida until he retired in 1993. He was a member of the Walnut Grove Church of the Brethren in Taylors Valley. He was preceded in death by his father, Solomon E. Lewis and his mother, Lavina Gentry Lewis; nine siblings, Arthur Lewis, Verna Lewis, Ora Hoke, Paul Lewis, Ruth Warden, Effie Price, Mildred Blevins, James Lewis, and Bill Lewis. He is survived by two children, Robyn Lewis Santa Coloma of Howell, Michigan and Jackson Scott Lewis of Gastonia, North Carolina; two grandchildren, Clinton Santa Coloma and Spencer Santa Coloma; two siblings, Florence Rowan and Rodger Lewis; and several nieces and nephews. The funeral service will be conducted at 2:00 P.M. Sunday, June 6, 2010 in the Walnut Grove Church of the Brethren in Taylors Valley with Mr. Terry Johnson, minister officiating. The committal service and interment will follow at Jackson-Lewis Cemetery in Taylors Valley. Pallbearers will be selected from family and friends. The family will receive friends from 1:00 P.M. to 2:00 P.M. Sunday prior to the funeral service at the church. Online condolences may be sent to the family and viewed by visiting www.garrettfuneralhome.com.  Mr. Lewis and his family are in the care of Garrett Funeral Home, 203 N. Shady Avenue, Damascus, VA 24236, 276-475-3631.

The family of Edwin Lewis created this Life Tributes page to make it easy to share your memories.