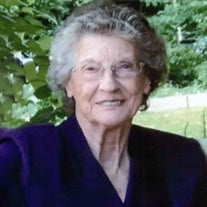 Edna Greer, 94, a longtime resident of Green Cove, VA passed away on Saturday, September 2, 2017, surrounded by her loved ones. She was born on August 26, 1923 in Ashe County, NC to the late Ruben and Bessie Greer. In addition to her parents, she was preceded in death by her husband, Woodrow Greer; a son, Marvin Greer; a grandson, Travis Greer; as well as an infant son, two sisters, and two brothers. She was a member of Green Cove Missionary Baptist Church. Edna was a loving and devoted mother and grandmother. She is survived by six daughters, Marjorie (Ralph) Sullivan of Damascus, VA, Bernice (Don) Reeves of Warrensville, NC, Bernadine (Ernie) Severt of Konnarock, VA, Darlene (Steve) Myers of Swansboro, NC, Roberta McConnell of Chilhowie, VA and Shelia (Leroy) Helton of Supply, NC; two sons, Boyd (Jan) Greer of Glade Spring, VA and Maurice Greer of Konnarock, VA; two brothers, Harold Greer and Elmer Greer, both of MD; as well as 22 grandchildren, 24 great grandchildren, and several nieces and nephews. The family would like to express a special thank you to her nurses, April and Emma from Hometown Hospice for all the love and care shown to Edna during her illness. The family will receive friends from 1:00 pm until 2:45 pm Monday, September 4, 2017 at Garrett Funeral Home. The funeral service will follow at 3:00 pm Monday, September 4, 2017, in the Riverview Chapel at Garrett Funeral Home with Pastor Les Ketron officiating. The committal service and interment will be conducted at 11:00 am Tuesday, September 5, 2017 at Green Cove Baptist Church Cemetery. Pallbearers will be her grandsons. Condolences for the family may be sent and viewed by visiting www.garrettfuneralhome.com. Mrs. Greer and her family are in the care of Garrett Funeral Home, 203 N. Shady Ave., Damascus, VA 24236; ph.#: (276) 475-3631.

Edna Greer, 94, a longtime resident of Green Cove, VA passed away on Saturday, September 2, 2017, surrounded by her loved ones. She was born on August 26, 1923 in Ashe County, NC to the late Ruben and Bessie Greer. In addition to her parents,... View Obituary & Service Information

The family of Edna Greer created this Life Tributes page to make it easy to share your memories.