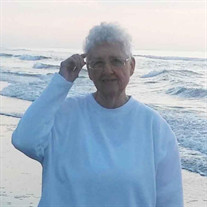 Doris Jean " D.J." Hash, 83, of Damascus, VA passed away on Sunday, May 30, 2021 at her residence. She was born in Rockingham County, NC, on August 22, 1937, a daughter of the late John and Margie Newnam. In addition to her parents, she was preceded in death by her husband, Charles Donald Hash; son, Gary Wayne Hash; brother, Lloyd Newnam; and sister, Carolyn N. Cox. She had lived and worked for the FBI in Washington, D.C. until 1967 then moved to Green Cove, VA. D.J. had a career in banking and retired from First Virginia Bank, aka BB&T in 1994. In October of 1995 she began working for the Damascus Senior Citizens Corporation and District III Governmental Cooperation of Marion until her retirement in 2019. She was a member of Damascus Road Baptist Church in Abingdon, former member of Green Cove Missionary Baptist Church where she served as Sunday school teacher from 1967 until 1988. She is survived by her daughter, Janet Hash Pennington and her husband, Steve; granddaughter, Rachel LeighAnn Pennington; and special nephew, David Wayne Cox. The family would like to extend a special thanks to Ballad Health Hospice, Home Nursing of Southwest Virginia, staff of Laurel Family Drug, Dr. Kellie Blackwell and staff, and all her friends she considered family. A private graveside service will be held at Sunset Memorial Park with Pastor John Massey, Jr. officiating. In keeping with Mrs. Hash wishes, there will be no viewing or visitation. In lieu of flowers, memorial contributions can be sent to American Cancer Society, P.O. Box 22478, Oklahoma City, OK 73123. Condolences for the family may be sent and viewed by visiting www.garrettfuneralhome.com. Mrs. Hash and her family are in the care of Garrett Funeral Home, 203 N. Shady Ave., Damascus, VA 24236; ph.#: (276) 475-3631.

The family of Doris Jean "D.J." Hash created this Life Tributes page to make it easy to share your memories.