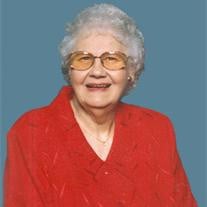 Doris Farmer, age 81, of Damascus, Virginia, passed away Monday, October 3, 2005 at Johnston Memorial Hospital in Abingdon, Virginia. She was a native of New York and had lived in Washington County, Virginia, for most of her life. She was the daughter of the late Fredrick and Lucille Miller Dietrich. She was preceded in death by her husband, Ernest Wade Farmer and son, William Thomas Farmer. She is survived by three sons, Wade Farmer and his wife, Marina, and Donald Farmer and his wife, Angie, both of Damascus, VA and Roger Farmer and his wife, Carrie, of Blountville, TN; three daughters, Pat Gunter, of Conover, NC, Iris Edwards and husband, Jerry, of Meadowview, VA, and Virginia Adamson and husband, Greg, of Gurnee, Illinois; twelve grandchildren; one great grandson; special sister-in-law, Mabel Farmer, and special friend, Mary "Ginny" Whitt; and several nieces and nephews. The funeral service will be conducted at 8:00 P.M. Tuesday, October 4, 2005, in the Garrett Funeral Home Chapel with Rev. Gary Ritchie officiating. Committal service and interment will be 11:00 A. M., Wednesday, October 5, 2005 in the Zion United Methodist Church Cemetery, Damascus, VA with Mr. Stephen Richardson officiating Pallbearers will be Ricky Edwards, Brian Edwards, Jason Bebber, Rick Bebber, Joe Lusk, and Daniel Dietrich. Honorary pallbearer will be Hoil Houck. Flowers will be accepted or memorial contributions may be sent to the American Diabetes Association, Virginia Affiliate, Inc., 404 Eighth Street, N. E. Suite C., Charlottesville, VA 22901. The family will receive friends from 6-8 P.M. Tuesday, October 4, 2005, at Garrett Funeral Home prior to the funeral service or at anytime at the residence of Wade and Marina Farmer. Condolences may be sent to the family at www.garrettfuneralhome.com. Mrs. Farmer and her family are in the care of Garrett Funeral Home, 203 N. Shady Ave., Damascus, VA 24236, 276-475-3631.

Doris Farmer, age 81, of Damascus, Virginia, passed away Monday, October 3, 2005 at Johnston Memorial Hospital in Abingdon, Virginia. She was a native of New York and had lived in Washington County, Virginia, for most of her life. She was the... View Obituary & Service Information

The family of Doris Farmer created this Life Tributes page to make it easy to share your memories.

Send flowers to the Farmer family.