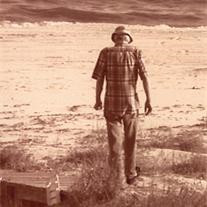 View this Videotribute Donnie "Poppi" Lewis, age 66, of Abingdon, Virginia, passed away Tuesday, September 20, 2005 at Johnston Memorial Hospital, Abingdon, Virginia. He was a lifelong resident of Washington County, Virginia. He was the son of the late Dewey Lewis and his mother, Lura Lewis, of Green Cove, Virginia. Mr. Lewis was a veteran of the U. S. Army, was retired from Westinghouse after over twenty years of service, was a member of the V. F. W. Post No. 9830, a volunteer for the research development of new treatments for lung disease, and was a member of the Green Cove Baptist Church. He was the proud "Poppi" of his two grandchildren, Jakob Rasmussen and Grace Rasmussen. In addition to his mother and two grandchildren, he is also survived by his wife, Judy Lewis, of Abingdon, Virginia; one son, Brad Lewis, of Powder Springs, Georgia; one daughter, Jennifer Lewis, of Sterling, Virginia; two sisters, Mattie Blevins and her husband, Kyle, of Whitetop, Virginia and Gladys Lewis, of Green Cove, Virginia; and several nieces and nephews. The funeral service will be conducted at 8:00 P. M. Wednesday, September 21, 2005 at Garrett Funeral Home Chapel, Damascus, Virginia with Mr. Maurice Widener, minister officiating. The committal service and interment will be 11:00 A. M. Thursday, September 22, 2005 at the Green Cove Cemetery, Green Cove, Virginia. Military rites will be conducted by Highlands Fellowship Veterans Honor Guard. In lieu of flowers, the family requests that memorial contributions be sent to the American Lung Association, P. O. Box 1249, Abingdon, VA 24212. The family will receive friends from 6:00 - 7:45 P. M. Wednesday, September 21, 2005 prior to the funeral service at Garrett Funeral Home. Condolences may be sent to the family at www.garrettfuneralhome.com. Mr. Lewis and his family are in the care of Garrett Funeral Home, 203 N. Shady Ave., Damascus, VA 24236, 276-475-3631.

The family of Donnie Lewis created this Life Tributes page to make it easy to share your memories.