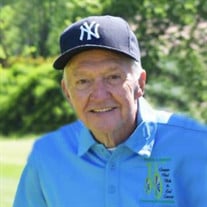 Dennis S. French, 78, of Damascus, VA passed away on Saturday, August 24, 2019 at his residence. Dennis was a loving husband, father, grandfather and a man of God. He loved his family, his church family at Damascus United Methodist Church and his community of Damascus. Dennis was a proud veteran of the U.S. Air Force, serving from 1958-62. He worked for American Cyanamid from 1962-97 and for Washington County Public Schools from 1998-2012. After retiring, he enjoyed being an attendant for Garrett Funeral Home. He was greatly loved and will be missed by many. He was preceded in death by his parents, Jack and Blanche French; a daughter, Penny French Garrett; two brothers, Kip French and Marshall French; one sister, Betty French Eddy and her husband, Harry; and a sister-in-law, Deb French. Survivors include his beloved wife of 54 years, Darlene Neely French; one son, Patrick French of New York, NY; one daughter, Olivia French of Charleston, SC; three grandchildren, Peyton Garrett, Madison Garrett, and Jack Jones; a son-in-law, Todd Garrett; two brothers, Ken French and Terry French and wife, Anita; one sister, Gail French Combs and husband, Jimmy; a sister-in-law, Betty Kip French; his mother-in-law, Rowena "Teen" Buckley; a brother-in-law, Eugene Neely; and many nieces and nephews. Funeral services will be held on Sunday, September 1, 2019 at 2 p.m. in the Riverview Chapel at Garrett Funeral Home with Pastor Greg Alderman and Rev. Creighton Smith officiating. The committal service and interment will follow at Sunset Memorial Park in Damascus, VA. Pallbearers will be Peyton Garrett, Jack Jones, Dekota Carrico, Eugene Neely, Ken French and Todd Garrett. The family will receive friends on Sunday at 1 p.m., prior to the service. In lieu of flowers, the family is requesting that donations be made to the Penny F. Garrett Cancer Foundation, P.O. Box 832, Damascus, VA 24236 or the Alzheimer's Association, 2020 Meadowview Parkway, #100, Kingsport, TN 37660. Condolences for the family may be sent and viewed by visiting www.garrettfuneralhome.com. Mr. French and his family are in the care of Garrett Funeral Home, 203 N. Shady Ave., Damascus, VA 24236; ph.#: (276) 475-3631.

Dennis S. French, 78, of Damascus, VA passed away on Saturday, August 24, 2019 at his residence. Dennis was a loving husband, father, grandfather and a man of God. He loved his family, his church family at Damascus United Methodist Church... View Obituary & Service Information

The family of Dennis S. French created this Life Tributes page to make it easy to share your memories.

Send flowers to the French family.