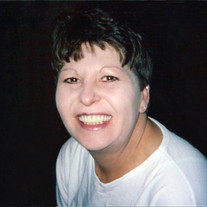 Delores Diane "DeeDee" Scott, 51, of Damascus, VA passed away on Thursday, May 30, 2019 at Bristol Regional Medical Center in Bristol, TN. She was a life long resident of Washington County, VA born on February 5, 1968, a daughter of the late Willie Summers and is survived by her mother, Louise Summers Garrett of Damascus, VA. In addition to her father, she was also preceded in death by a brother, Phillip Summers. She worked at the Harbor House in Abingdon, VA and loved to read, crochet, and spend time with her canine companions. DeeDee was a member of Pleasant View Baptist Church. In addition to her mother, she is survived by her husband of fourteen years, Joe Scott; step-daughter, Amanda Rodriquez and her husband, Indio, of Bristol, TN; two step-granddaughters, Karma Scott and Athena Rodriquez and one step-grandchild on the way; one brother, Willie Summers, Jr. of Damascus, VA; a sister-in-law, Kathy Hardin and her husband, Doug, of Meadowview, VA; one niece, Heather Fields and her husband, Jerry, of Bristol, VA; three nephews, Tony Summers of Abingdon, VA, Joshua Summers of Damascus, VA, and Kevin Summers of Marion, VA; three great nieces; and a special friend, Gwen. The family will receive friends from 1:00 PM until 3:00 PM Sunday, June 2, 2019 at Garrett Funeral Home. The funeral service will follow at 3:00 PM Sunday in the Riverview Chapel at Garrett Funeral Home with Pastor Vann Seal officiating. The committal service and inurnment will be conducted at 1:00 PM Friday, June 7, 2019 at Blackwell Chapel Cemetery in Meadowview, VA. Condolences for the family may be sent and viewed by visiting www.garrettfuneralhome.com. Mrs. Scott and her family are in the care of Garrett Funeral Home, 203 N. Shady Ave., Damascus, VA 24236; ph.#: (276) 475-3631.

Delores Diane "DeeDee" Scott, 51, of Damascus, VA passed away on Thursday, May 30, 2019 at Bristol Regional Medical Center in Bristol, TN. She was a life long resident of Washington County, VA born on February 5, 1968, a daughter of the late... View Obituary & Service Information

The family of Delores Diane "DeeDee" Scott created this Life Tributes page to make it easy to share your memories.

Send flowers to the Scott family.