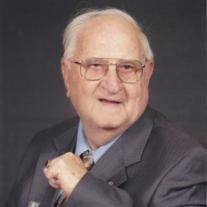 Creed F. Jones, Jr., age 91, of Damascus, Virginia, passed away Saturday, January 12, 2013 at Johnston Memorial Hospital in Abingdon, Virginia. He was a native of Coeburn, Virginia and had lived in Bartley, West Virginia for 27 years where he worked as a coal miner. He had lived in Detroit, Michigan for 23 years working for Chrysler Corporation. He moved to Damascus, Virginia in 1990. Mr. Jones was a 60 year Mason and was a past Master and member of the Liberty Hall Masonic Lodge No. 104. He was a member of the Board of Directors for People, Inc. and was the former Mayor of Damascus. He was a member of the First Baptist Church in Damascus. He is survived by two daughters, Anna M. Davis and her husband, Hershel of Baltimore, Maryland and Susan Lutz and her husband, David, of West Olive, Michigan; three sons, Danny L. Jones and his wife, Nancy, of Smith Mountain Lake, Virginia, Dr. Creed F. Jones, III and his wife, Jana, of Hendersonville, Tennessee, and Dwight Overturf and his wife, Rhonda, of Fort Chiswell, Virginia; 18 grandchildren, 15 great grandchildren, 4 great great grandchildren, and many nieces and nephews. The funeral service will be conducted at 11:00 A.M. Tuesday, January 15, 2013 in the Riverview Chapel at Garrett Funeral Home with Rev. Wayne Guynn officiating. The committal service and interment will be at 2:00 P.M. Tuesday, January 15, 2013 at Laurel Grove Cemetery in Norton, Virginia. A Masonic service will be conducted by the Liberty Hall Masonic Lodge No. 104 at 5:00 P.M. Monday, January 14, 2013 prior to the visitation at Garrett Funeral Home. In lieu of flowers, the family requests memorial contributions be sent to People Incorporated of SW Virginia, 1173 W. Main St., Abingdon, VA 24210. The family will receive friends Monday immediately following the Masonic Service until 7:00 P.M. at Garrett Funeral Home. Online condolences may be sent to the family and a memorial tribute may be viewed by visiting www.garrettfuneralhome.com. Mr. Jones and his family are in the care of Garrett Funeral Home, 203 N. Shady Ave., Damascus, VA 24236, (276)-475-3631.

Creed F. Jones, Jr., age 91, of Damascus, Virginia, passed away Saturday, January 12, 2013 at Johnston Memorial Hospital in Abingdon, Virginia. He was a native of Coeburn, Virginia and had lived in Bartley, West Virginia for 27 years where... View Obituary & Service Information

The family of Creed F. Jones Jr. created this Life Tributes page to make it easy to share your memories.

Send flowers to the Jones family.