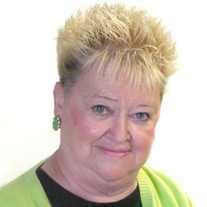 Corrine Dancy Hurley, age 75, of Meadowview, Virginia passed away on Monday, January 19, 2015 at her residence. She was born in North Wilkesboro, NC. on November 15, 1939, a daughter of the late William Dancy and Ruth Miller Dancy. In addition to her parents, she was preceded in death by her step-mother, Martha Dancy; one brother, James Albert Dancy; and one sister, Shirley Jean Brown. She had lived in Fairfax, Virginia until 1961 when she moved with her husband, John, to Manassas, Virginia. They have made their home in Meadowview, Virginia since 2002. Corrine loved spending time with all the girls at Eula's Hairstyling Shop. She was of the Baptist Faith. Corrine is survived by her loving husband of 53 years, John G. Hurley, one son, Johnny G. Hurley, Jr. and his wife, Melanie, of Manassas, VA; one grandson, Wyatt Cole Hurley; one brother, Robert Lee Dancy of Nashville, TN; and several nieces and nephews. The family will receive friends from 1:00 P.M. until 2:00 P.M. Saturday, January 24, 2015 at Garrett Funeral Home. A memorial service will follow at 2:00 P.M. Saturday in the Riverview Chapel at Garrett Funeral Home with Pastor James Gentry officiating. The family would like to extend a special thanks to Mountain States Hospice for their special care given to Corrine. In lieu of flowers, the family is requesting that donations be made to the Penny F. Garrett Sarcoma Foundation, 29394 Zion Church Road, Damascus, VA 24236. Condolences for the family may be sent and viewed by visiting www.garrettfuneralhome.com. Mrs. Hurley and her family are in the care of Garrett Funeral Home, 203 N. Shady Ave., Damascus, VA 24236; ph.#: (276) 475-3631.

Corrine Dancy Hurley, age 75, of Meadowview, Virginia passed away on Monday, January 19, 2015 at her residence. She was born in North Wilkesboro, NC. on November 15, 1939, a daughter of the late William Dancy and Ruth Miller Dancy. In addition... View Obituary & Service Information

The family of Corrine Dancy Hurley created this Life Tributes page to make it easy to share your memories.