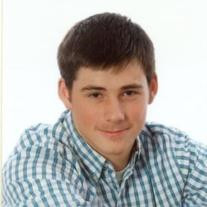 Corey Andrew Ashley, age 19, of Damascus, Virginia passed away on Monday, October 29, 2012 from injuries sustained in an automobile accident. He was a lifelong resident of Damascus, Virginia and was a 2012 graduate of Holston High School where he played football (# 9), wrestled, played baseball, and really just enjoyed all sports in general. He loved helping people and was such a caring person for anyone he came in contact with. While playing football, it was nothing unusual for him to help his opponent up after he had just tackled him. He enjoyed watching Clemson Tigers football. He also loved hunting and fishing and just being outdoors. He was so proud of his first deer he had got during deer season last year. He was an exceptional welder and worked for Steel Fab, Inc. He enjoyed helping his little brother, Trace, with football on the Jr. Cavs football team and they spent many hours playing Xbox together. Most of all, Corey enjoyed spending time with the love of his life, his wife, Haley Ashley, and was especially excited about them having a baby. In addition to his wife, he is also survived by his parents, Melissa and Daniel Ashley of Damascus, Virginia; one sister, Frances Grant of Abingdon, Virginia; one brother Trace Ashley of Damascus, Virginia; his mother-in-law and father-in-law, Bethany Hawkins and Jerry Hawkins, both of Damascus, Virginia; his paternal grandmother, Betty Ashley of Damascus, Virginia; his maternal grandparents, Gail and Tim Grant of Abingdon, Virginia; a special uncle who loved him dearly, Junior Grant and his wife, Terrilyn, of Damascus, Virginia; a special first cousin, Nikki McVey; and several other aunts, uncles, cousins, and a host of special friends. The funeral service will be conducted at 11:00 A.M. Friday, November 2, 2012 in the Riverview Chapel at Garrett Funeral Home with Pastors David Matlock and David Mizzell officiating. The committal service and interment will follow at Bethel Cemetery, Abingdon, Virginia. Pallbearers will be Josh Thomas, Bradley Hand, Tristan Heath, Jackie Taylor, Josh Ashley, and Nathan Merritt. The family will receive friends from 6:00 P.M. to 9:00 P.M. Thursday, November 1, 2012 at Garrett Funeral Home. Online condolences may be sent to the family and a memorial video tribute may be viewed by visiting www.garrettfuneralhome.com. Corey and his family are in the care of Garrett Funeral Home, 203 N. Shady Ave., Damascus, VA 24236, ph.#: 276-475-3631.

The family of Corey Andrew Ashley created this Life Tributes page to make it easy to share your memories.

Send flowers to the Ashley family.