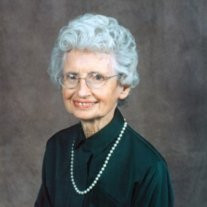 Conna Lee Blevins, age 87, of Shady Valley, Tennessee went home to be with her Lord and Savior on Friday, December 20, 2013 from injuries sustained in an automobile accident. She was a native of Shady Valley, Tennessee and was the daughter of the late Dennis and Ethel Blevins. Ms. Blevins had lived in Elizabethton, Tennessee for 42 years where she owned and operated Lynnwood Beauty Shop. After her retirement in 1986, she moved back to her home in Shady Valley, Tennessee. She was a member of Crandull Church of Christ in Shady Valley, Tennessee. She was joined in death and was accompanied into Heaven with her sister, Peggy Ann Dugger, who also passed away in the automobile accident. In addition, she was also preceded in death by two sisters, Nancy Blevins and Margie Reeves; and one brother, W.F. Blevins. She is survived by six brothers, Clay Blevins, Ned Blevins, Leon Blevins, and Forrest Blevins all of Shady Valley, Tennessee, Kenneth Blevins of Rex, Georgia, and Bobby Blevins of Butler, Tennessee; and several nieces and nephews. The family respectfully requests the honor of your presence at the double funeral service to honor and celebrate the lives of Conna Lee Blevins and Peggy Ann Dugger on Monday, December 23, 2013 at 8:00 PM in the Riverview Chapel at Garrett Funeral Home in Damascus, Virginia. Mr. Phil Blevins will officiate. The committal services and interments will be at 11:00 AM Tuesday, December 24, 2013 at Blevins Cemetery in Shady Valley, Tennessee. Everyone attending the committal services is asked to meet at the cemetery on Tuesday by 10:45 AM. Pallbearers for Ms. Blevins will be Eric Reeves, Dirk Blevins, Doug Blevins, George Blevins, Kenny Eller, and Jason Reeves. A visitation period to share memories and offer support to the family will be from 6:00 PM to 7:45 PM Monday prior to the funeral services at Garrett Funeral Home. Online condolences may be sent to the family and a memorial video tribute may be viewed by visiting www.garrettfuneralhome.com. Ms. Blevins and Mrs. Dugger and their family are in the care of Garrett Funeral Home, 203 N. Shady Ave., Damascus, VA 24236, ph.#: 276-475-3631.

The family of Conna Lee Blevins created this Life Tributes page to make it easy to share your memories.