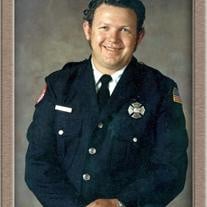 (Must have Broadband Connection to view Video Tribute) Clayton H. Trent, Sr. age 62, of Glade Spring, Virginia passed away on Sunday, July 29, 2007 at Wellmont Hospice House in Bristol, Tennessee. He was a lifelong resident of Washington County, Virginia, and was the son of the late Emmett and Hattie Trent. In addition to his parents he was preceded in death by a sister, Thelma Wilson. Mr. Trent was a lifetime member of Glade Spring Volunteer Fire Department and a founding member of the Glade Spring Volunteer Life Saving Crew. He is survived by his wife of forty-three years, Carrie Trent, of Glade Spring; one son, Harold Trent and his wife, Lisa, of Glade Spring; one daughter, Ruth Trent Felty and her husband, Tracy, of Chilhowie; two special grandchildren, Travis and Cynthia Trent, of Glade Spring; a very loving friend and caregiver, Carolyn Preston, of Glade Spring; two brothers, Johnny Trent, of Lansing, NC and Ernest Trent, of Saltville; one sister, Dorothy Berry, of Glade Spring; a very special uncle, Burton DeBusk, of Maryland and several nieces, nephews and cousins. The funeral service will be conducted at 11:00 A. M. Wednesday, August 1, 2007 at the Garrett Funeral Home Chapel with Pastor Bobby Briggs officiating. The committal service and interment will follow at Sunset Memorial Park in Damascus, Virginia. Pallbearers will be Kenneth Trent, Elmer Stanley, Tony Rector, Ernest Price, Brian Price, and Jeff Sweat. The family will receive friends from 7-9:00 P. M. Tuesday, July 31, 2007 at Garrett Funeral Home. Condolences may be sent to the family and a memorial video tribute may be viewed by visiting www.garrettfuneralhome.com or fax condolences to 276-475-5902. Mr. Trent and his family are in the care of Garrett Funeral Home, 203 N. Shady Ave., Damascus, VA 24236, 276-475-3631.

The family of Clayton Trent, created this Life Tributes page to make it easy to share your memories.

(Must have Broadband Connection to view Video Tribute) Clayton...

Send flowers to the Trent, family.