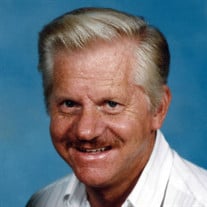 Claude Lawrence Lewis, husband of the late Dorothy Owens Lewis, died May 11, 2016 in Roanoke, Virginia, following a hard-fought battle against cancer. He was 81 years old. He was a lifetime resident of Washington County, Virginia, and lived in the Green Cove community outside Damascus, Virginia. Claude loved the outdoors and always felt most at home in the mountains he grew up in. Chestnut Mountain, Whitetop Mountain, Iron Mountain, and Mount Rogers were his stomping grounds. He knew all the back roads, trails, and shortcuts and could readily identify any tree or plant. The vegetable gardens he dabbled in during his final weeks are a thriving testament to his perennial green thumb. He liked animals, and they liked him. Especially cats. A shrewd trader and avid collector of just about anything and everything, he never passed a yard sale or flea market without stopping - and rarely paid the asking price for anything. Shy but still surprisingly outgoing, in his own easy way he could strike up a conversation with just about anyone - and he almost always did. He could often be found sharing stories and good times at senior citizens lunches, during bluegrass music gatherings, on a front porch, and at local festivals. He is survived by two children - his daughter Delta Thompson and her husband Daniel Thompson of Roanoke, Virginia, and his son Jerry Lewis and his partner Michael Fuller of Atlanta, Georgia. He also is survived by two grandchildren - Laura Thompson, of Brooklyn, New York, and Dana Thompson, of Philadelphia, Pennsylvania. He is the son of the late Robert Lewis and Dana Phipps Lewis. The oldest of nine children, he is survived by seven sisters and brothers - Norman, Eleanor, Archie, Dillard, Bonnie, Annie, and Earl - and is preceded in death by his brother Dexter. His survivors also include dozens of loving aunts, uncles, cousins, brothers-and-sisters-in-law, and nieces and nephews. Claude leaves behind numerous family members and friends who will miss him dearly - people whose lives he enriched by his generosity, optimism, charm, and good humor. The family will receive visitors from 6-7:45 PM on Friday evening, May 13, 2016 at Garrett Funeral Home in Damascus. The funeral service will follow at 8:00 PM Friday at the funeral home with Rev. Leonard Tenney officiating. The committal service and interment will be at 11:00 AM Saturday, May 14, 2015 at Green Cove Baptist Church Cemetery. Honorary Pallbearers will be Norman Lewis, Archie Lewis, Dillard Lewis, Earl Lewis, Randy Lewis, and Rick Thomas. Online condolences may be sent to the family by visiting www.garrettfuneralhome.com. In lieu of flowers, the family requested that memorial contributions could be made to the Mt. Rogers Volunteer Fire Department and Rescue Squad , P.O. Box 47, Whitetop, Virginia 24292. Mr. Lewis and his family are in the care of Garrett Funeral Home, 203 N. Shady Ave., Damascus, VA 24236; ph.#: 276/475-3631.

Claude Lawrence Lewis, husband of the late Dorothy Owens Lewis, died May 11, 2016 in Roanoke, Virginia, following a hard-fought battle against cancer. He was 81 years old. He was a lifetime resident of Washington County, Virginia, and lived... View Obituary & Service Information

The family of Claude L. Lewis created this Life Tributes page to make it easy to share your memories.