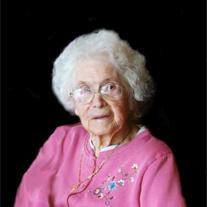 Clarice Pruitt, age 84, of Wellington, Ohio went to be with the Lord on Thursday, May 27, 2010 in Wellington, Ohio after a long illness. She was born September 23, 1925 in West Jefferson, North Carolina and was a daughter of the late James Millard Furches and Geneva Victoria Farmer Furches. She lived in Green Cove, Virginia with her family early in her life and after graduating from high school. While living in Green Cove, she attended the Green Cove Church of Christ. She was an exceptional athlete and basketball player. During World War II she worked at an aircraft plant. Following the war, she worked at the Damascus, Virginia hosiery mill and the Silver Moon restaurant. Clarice was a member of the Sheffield Lake Ohio Women’s club and was active in Sheffield Lake politics. She was also an active leader in the Girl Scouts and Boy Scouts. Clarice moved with her family to the family farm in Huntington township in 1964 and raised her family on the farm. As business expanded, Clarice moved and made family homes in Kingwood, WV, Portland, OR, Miami, FL, and Pittsburg, PA, before moving back to the family farm in Ohio. She has since been living at the Elms Retirement Village in Wellington. Every place she has lived, she was loved by her family and her many friends. In addition to her parents, she was also preceded in death by a son, Daniel Pruitt; three sisters, Ruth Ann, Virginia, and Nellie “Nell”; and two brothers, Charles and Ray. She is survived by her loving husband, Russell Pruitt Sr. of Wellington, Ohio after 63 years of marriage; a daughter, Phyllis Parks of Andover, Ohio; two sons, Russell Pruitt Jr. and his wife, Helen Mary, of Norwalk, Ohio, and Mark Pruitt and his wife, Cheryl, of Wellington, Ohio; one brother, James Odis Furches of Lenoir, North Carolina; seven grandchildren, Chris Lababidi and her husband, Ali, Jennifer Parks, Brian Pruitt, Regina Hamby and her husband, Scott, Kelly Pruitt, Kimberly Pruitt, and Holly Pruitt; three great grandchildren, Michael Parks, Adam Lababidi, and Deanna Lababidi. The family appreciates all the caring help from the Alzheimer’s Association. The funeral service will be conducted at 3:00 P.M. Sunday, May 30, 2010 in the Riverview Chapel at Garrett Funeral Home with Rev. Wayne Guynn officiating. The committal service and interment will follow at Sunset Memorial Park in Damascus, Virginia. Pallbearers will be selected from family and friends. The family will receive friends from 1:00 P.M. to 2:45 P.M. Sunday prior to the funeral service at Garrett Funeral Home. Online condolences may be sent to the family and a memorial video tribute may be viewed by visiting www.garrettfuneralhome.com. Mrs. Pruitt and her family are in the care of Garrett Funeral Home, 203 N. Shady Avenue, Damascus, VA 24236, 276-475-3631.

Clarice Pruitt, age 84, of Wellington, Ohio went to be with the Lord on Thursday, May 27, 2010 in Wellington, Ohio after a long illness. She was born September 23, 1925 in West Jefferson, North Carolina and was a daughter of the late James... View Obituary & Service Information

The family of Clarice Pruitt created this Life Tributes page to make it easy to share your memories.

Clarice Pruitt, age 84, of Wellington, Ohio went to be with the...

Send flowers to the Pruitt family.