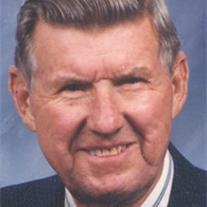 View this Videotribute Chester Carl Chet Gentry, age 77, of Damascus, Virginia passed away on Monday, January 17, 2005 at the V.A Medical Center in Mountain Home, Tennessee. Chet was born in Shady Valley, Tennessee on May 26, 1927 to the late Martha Walker Gentry and Roderick Gentry. He was a veteran of the U.S. Army and served in both World War II and the Korean Conflict. He retired from the Raytheon Company in 1989, after 31 years of service. He enjoyed playing golf and spending time with his grandchildren since his retirement. Chet served on the Town Council in Damascus from 1984 -1986, 19901998, and was presently serving since July 2004. He was a member of the V. F. W. Post No. 9830 and the American Legion Post No. 0135. He was a 39 year member of the Liberty Hall Masonic Lodge No. 104, where he served as master in 1972. He was a member of the Desert Sands Shrine Club in Abingdon, Virginia, and the Kazim Temple in Roanoke, Virginia, and was very active in transporting crippled and burned children to the Shriner's Hospitals in Greenville, South Carolina and Cincinnati, Ohio. He was an honorary member of the Damascus Volunteer Rescue Squad. He was a member of the First Baptist Church in Damascus. In addition to his parents, he was also preceded in death by two sisters and five brothers. He is survived by his wife of 50 years, Nancy Poff Gentry; a daughter, Valarie Gentry Johnson, and her husband, Rick, of Abingdon, Virginia; and two very special grandchildren, Justin and Erica Johnson, of Abingdon, Virginia; a special nephew, Jack Hutchins, of Shady Valley, Tennessee; and several nieces and nephews. The funeral service will be conducted at 8:00 P.M. Thursday, January 20, 2005, in the First Baptist Church in Damascus with Rev. Alan McCullough officiating. The family will receive friends from 6:00 to 7:45 P.M. Thursday prior to the funeral service at the church. The committal service and interment will be at 11 :00 AM. Friday, January 21, 2005, at Sunset Memorial Park in Damascus. A Masonic graveside service will be conducted by the Liberty Hall Masonic Lodge No.1 04 and military rites will be presented by the Highlands Fellowship Veterans Honor Guard. Flowers are appreciated or memorial contributions may be sent to the Damascus Volunteer Rescue Squad, P.O. Box 458, Damascus, VA 24236. Pallbearers will be Tom Trentadue, Paul Lethcoe, Monte Stamper, Terry Prater, Warren Wilson, Eugene Neely, Roy Neely, and Bob Cole. Honorary pallbearers will be the members of his Sunday school class at the First Baptist Church. Condolences may be sent to the family through our website at www.garrettfuneralhome.com. Mr. Gentry and his family are in the care of Garrett Funeral Home, 203 N. Shady Ave., Damascus, VA, telephone 276-475-3631.

View this Videotribute Chester Carl Chet Gentry, age 77, of Damascus, Virginia passed away on Monday, January 17, 2005 at the V.A Medical Center in Mountain Home, Tennessee. Chet was born in Shady Valley, Tennessee on May 26, 1927 to the... View Obituary & Service Information

The family of Chester Chet Gentry created this Life Tributes page to make it easy to share your memories.