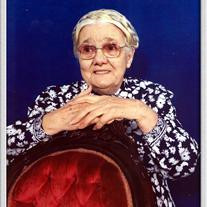 (Must have Broadband Connection to view Video Tribute) Chessie Gentry, age 94, of the Sutherland Community, passed away on Tuesday, May 6, 2008 at Bristol Regional Medical Center. She was a native of Ashe County, North Carolina and had lived in Johnson County, Tennessee until 1971, when she moved to Bear, Delaware. She had lived in the Sutherland Community for the past ten years. She was a member of Non-Denominational Church in Mountain City, Tennessee. Mrs. Gentry was the widow of Milton John ?M. J.? Gentry and was preceded in death by a daughter, Betty Gentry and four grandchildren. She is survived by three daughters, Sue Gentry Manuel and her husband, Harold, of Damascus, Virginia, Donna K. Summerville, of Egg Harbor, New Jersey, and Ruby E. Hansen, of Bristol, Tennessee; three sons, Elmer G. Gentry and his wife, Mary, of Albany, New York, William J. Gentry, of Johnson City, Tennessee, and Bert Gentry and his wife, Louise, of Milford, Delaware; eight grandchildren; six great grandchildren; one great-great granddaughter; and several nieces and nephews. The funeral service will be conducted at 2:00 P.M. Saturday, May 10, 2008 in the Garrett Funeral Home Chapel with Mr. Robert Johnson, minister officiating. The committal service and interment will follow at Gentry and Greer Cemetery, Laurel Bloomery, Tennessee. Pallbearers will be the following grandsons, Douglas Gentry, Jeff Gentry, Chris Manuel, Marty Manuel, Mikie Barker, and Danny Wilson. Honorary pallbearers will be Harold Manuel and Vincent Gentry. Flowers will be accepted or contributions may be made to the American Cancer Society, P. O. Box 246, Abingdon, VA 24212. The family will receive friends from 1:00 - 2:00 P. M. Saturday prior to the funeral service at the funeral home or at anytime at the home of her daughter, Sue Manuel. Online condolences may be sent and viewed and a memorial video tribute may be viewed by visiting www.garrettfuneralhome.com. Mrs. Gentry and her family are in the care of Garrett Funeral Home, 203 N. Shady Street, Damascus, VA 24236, 276-475-3631.

(Must have Broadband Connection to view Video Tribute) Chessie Gentry, age 94, of the Sutherland Community, passed away on Tuesday, May 6, 2008 at Bristol Regional Medical Center. She was a native of Ashe County, North Carolina and had lived... View Obituary & Service Information

The family of Chessie Gentry created this Life Tributes page to make it easy to share your memories.

(Must have Broadband Connection to view Video Tribute) Chessie...