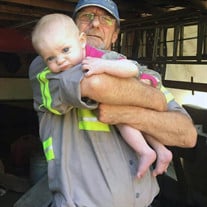 Charles Alfred Widener, Jr., 55, of Damascus, VA passed away on Friday, September 27, 2019 at his residence in Damascus, VA. He was born in Abingdon, VA on July 9th, 1964. A son of the late Charles Alfred Widener, Sr. and Mary Sue Rouse Widener. In addition to his parents, he was preceded in death by his wife, Rhonda Carol Widener; two brothers Bobby Charles Widener and Johnny Widener; and his mentor and best friend, Dennis Clark. Charles was a resident of Damascus for several years and was devoted husband, father, and grandfather and enjoyed spending time with his friends and family. In addition to this he also enjoyed raising chickens. Charles is survived by one son, Avery Widener and his wife, Jaclyn Davenport, of Damascus, VA; a very special friend, Cindy Mathews; five brothers, Allen Widener, Martin Widener and his wife, Lapeta, Ellis Widener and his wife, Claudine, CJ Widener and his wife, Melva, Robert Widener and his wife, Lola; three sisters, Rosie Ward and her husband, Troy, Jackie Shuler and her husband, Dennis, and Betty Heath and her husband, Edward; special niece, Taylor Holman and her son, Karsyn Robbins; and his grandchild, Josephine "Josie" Grace Widener. A memorial service for Charles will occur at a later date. In lieu of flowers, the family is requesting that donations be made to the funeral home to help cover funeral expenses. Condolences for the family may be sent and viewed by visiting www.garrettfuneralhome.com. Mr. Widener and his family are in the care of Garrett Funeral Home, 203 N. Shady Ave., Damascus, VA 24236; ph.#: 276-475-3631.

The family of Charles Alfred Widener Jr. created this Life Tributes page to make it easy to share your memories.