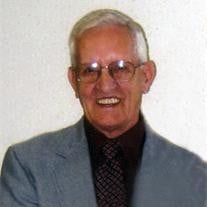 Charles D. Cook, age 82, of Damascus, Virginia went to his reward on Wednesday, July 18, 2012 at his residence following a short battle with cancer while surrounded by his loving family. He was a life long resident of Washington County, Virginia and a son of the late Carl and Ruth Cook. He was a veteran of the U.S. Army during the Korean Conflict and was a member of the American Legion Post # 0135. He retired from Brunswick Corporation after 35 years of service. He was a member of the First Baptist Church in Damascus, where he served as a deacon, was on the baptismal committee, and was Sunday school superintendent. He spent his 20 years of retirement helping friends, neighbors, and family. In addition to his parents, he was also preceded in death by four brothers, Clayton Cook, Earnest Cook, Herbert Cook, and Vernon Cook.  He is survived by his wife of 58 years, Doris W. Cook; one daughter, Karen C. Miller and her husband, Larry E., of Bristol, Virginia; one brother, Robert Cook and his wife, Lorraine, of Damascus, Virginia; four sisters, Martha C. Dolinger and Eleanor C. Dolinger both of Glade Spring, Virginia, Rebecca C. Heath of Meadowview, Virginia, and Mary C. Thomas of Abingdon, Virginia; special friends, Carrie Price and Don Foster; and several nieces and nephews.  The funeral service will be conducted at 8:00 P.M. Friday, July 20, 2012 in the Riverview Chapel at Garrett Funeral Home with Rev. Wayne Guynn and a family friend and Pastor, Vann Seal, officiating. The committal service and interment will be at 2:00 P.M. Saturday, July 21, 2012 at Sunset Memorial Park in Damascus, Virginia with military graveside rites conducted by the Highlands Veterans Honor Guard and Virginia National Guard Honor Guard. Pallbearers will be Danny Thomas, Buddy Thomas, Don Foster, Zach Heath, Joe Cook, David Fletcher, Preston Holmes, and Bobby Nelson. Honorary pallbearers will be Bob Cole, Bob Copenhaver, Blaine Huffman, Rick Rouse, and Tim Brown. In lieu of flowers, the family requests memorial donations be sent to the Veterans Memorial of Damascus, P.O. Box 854, Damascus, VA 24236. The family will receive friends from 6:00 P.M. to 7:45 P.M. Friday prior to the funeral service at Garrett Funeral Home. The family would like to extend a special thank you to Home Health Nurse, Michelle, and Hospice Nurses, Paula and Denise, and aid, Ivy, for their loving care; and the third floor nurses and aids at Johnston Memorial Hospital. Online condolences may be sent to the family and a video memorial tribute may be viewed by visiting www.garrettfuneralhome.com.  Mr. Cook and his family are in the care of Garrett Funeral Home, 203 N. Shady Ave., Damascus, VA 24236, ph.#: 276-475-3631.

Charles D. Cook, age 82, of Damascus, Virginia went to his reward on Wednesday, July 18, 2012 at his residence following a short battle with cancer while surrounded by his loving family. He was a life long resident of Washington County, Virginia... View Obituary & Service Information

The family of Charles Cook created this Life Tributes page to make it easy to share your memories.

Send flowers to the Cook family.