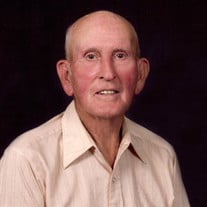 Charles Edward "Ed" Campbell, age 91, of Damascus, Virginia passed away on Tuesday, March 15, 2016 in the Johnston Memorial Hospital, Abingdon, Virginia. He was life long resident of Washington County, VA and was a son of the late Charles and Minnie Campbell. He had been a resident at Valley Health Care in Chilhowie, VA for the past year. He was veteran of the U.S. Army Air Corp during World War II and retired from Raytheon Corporation after twenty-two years of service. He was a member of First Baptist Church in Damascus, VA. He is survived by one son, Jerry Campbell and his wife, Pattie, of Damascus, VA; four grandchildren, Tina, Matheu, Katie, and Kelsey; two great grandchildren, Sydney and Brooklyn; one brother, Bob Campbell of Damascus, VA; one sister, Louise Hawthorne and her husband, Mack, of Ellington, VA; and several nieces and nephews. The family will receive friends from 12:00 noon until 1:00 pm Friday, March 18, 2016 at Garrett Funeral Home. The funeral service will follow at 1:00 pm Friday, March 18, 2016, in the Riverview Chapel at Garrett Funeral Home with Pastor David Matlock officiating. The committal service and interment will follow at Sunset Memorial Park in Damascus, VA. Military graveside rites will be conducted by Highlands Veterans Honor Guard and the Army National Guard Honor Guard. Pallbearers will be selected from family and friends. In lieu of flowers, the family is requesting that donations be made to First Baptist Church, P.O. Box 993, Damascus, VA 24236. Online condolences for the family may be sent and viewed by visiting www.garrettfuneralhome.com. Mr. Campbell and his family are in the care of Garrett Funeral Home, 203 N. Shady Avenue, Damascus, VA 24236; ph.#: (276) 475-3631.

Charles Edward "Ed" Campbell, age 91, of Damascus, Virginia passed away on Tuesday, March 15, 2016 in the Johnston Memorial Hospital, Abingdon, Virginia. He was life long resident of Washington County, VA and was a son of the late Charles and... View Obituary & Service Information

The family of Charles Edward "Ed" Campbell created this Life Tributes page to make it easy to share your memories.