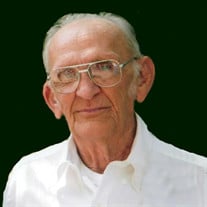 Carl E. Lewis, Sr., 88, of Bristol, Virginia passed away on Monday, December 12, 2016 in the Wellmont Hospice House, Bristol, Tennessee following an extended illness. He was born in Russell County, VA on November 19, 1928, a son of the late S. J. Lewis and Lena Hubble Lewis. In addition to his parents, he was preceded in death by one son, John Samuel Lewis; four brothers and four sisters. Carl was a veteran of the U.S. Army having served in the Korean Conflict. He was a truck driver for Mason and Dixon for 32 years and he loved to play golf and hunt. He is survived by his loving wife of 64 years, Eleanor B. Lewis; three sons and one daughter, Carl Lewis, Jr. and his wife, Lorri, Dawn Thomas, Jeff Lewis and his wife, Judy, and Brian Lewis and his wife, Lori; seven grandchildren, three great grandchildren, one sister, Lucille Burke; one brother, Glen Lewis; and several nieces, nephews, and many friends and loved ones. The family would like to thank the hospice nurses, the nurses on 4E, and all the family and friends for the care they provided. The family will receive friends from 10:00 A.M. until 10:45 A.M. Thursday, December 15, 2016 at Garrett Funeral Home. A graveside service will follow at 11:00 A.M. Thursday at Sunset Memorial Park in Damascus, VA with Pastor Travis Ingle officiating. Military graveside rites will be conducted by the Virginia National Guard Honor Guard and the Highlands Veterans Honor Guard. Pallbearers will be John Buchanan, James Buchanan, Danny Rock, Mike Reynolds, Bill Grogan, and David Dean. Those who wish to attend the graveside service are asked to meet at the funeral home by 10:45 A.M. Thursday to go in procession to the cemetery. In lieu of flowers, the family is requesting that donations be made to Wellmont Hospice House, 280 Steeles Road, Bristol, TN 37620 or to a favorite charity of ones choice. Online condolences for the family may be sent and viewed by visiting www.garrettfuneralhome.com. Mr. Lewis and his family are in the care of Garrett Funeral Home, 203 N. Shady Avenue, Damascus, VA 24236; ph.#: (276) 475-3631.

Carl E. Lewis, Sr., 88, of Bristol, Virginia passed away on Monday, December 12, 2016 in the Wellmont Hospice House, Bristol, Tennessee following an extended illness. He was born in Russell County, VA on November 19, 1928, a son of the late... View Obituary & Service Information

The family of Carl E. Lewis, Sr. created this Life Tributes page to make it easy to share your memories.