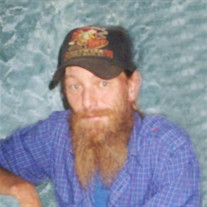 Billy M. Thomas, 59, of Glade Spring, Virginia passed away on Saturday, September 24, 2016 at Johnston Memorial Hospital in Abingdon, Virginia. He was born in Marion, Virginia and was a son of the late Venton Thomas and survived by his mother, Maggie Thomas of Glade Spring, Virginia. In addition to his father, he was preceded in death by two brothers, Kenny Thomas and Johnny Thomas. He was a resident of Glade Spring, Virginia and was a farmer. In addition to his mother, Billy is survived by two daughters, Heather Parris and Amanda Parsons both of Damascus, Virginia; four granddaughters, Mackenzie Parris, Kari Parris, Ariana Parsons, and Anna Grace Blevins; one sister, Shirley Thomas and her fiance, Carl Riley, of Glade Spring, Virginia; several nieces and nephews; and special friends, Pride Arrington and his wife, Tracy, Little Pride Arrington, and Kiley Arrington. The family will receive friends from 6:00 PM to 7:45 PM Tuesday, September 27, 2016 at Garrett Funeral Home. The funeral service will follow at 8:00 PM Tuesday in the Riverview Chapel at Garrett Funeral Home with Pastor Terry Compton officiating. The committal service and interment will be at 11:00 AM Wednesday, September 28, 2016 at Rush Creek Cemetery in Glade Spring, Virginia. Pallbearers will be Little Pride Arrington, Jay Owens, Justin Austin, Jonathan Thomas, Ricky Thomas, and Charlie Widener. Honorary pallbearers will be Pride Arrington and Randy Hicks. Those who wish to attend the committal service on Wednesday are asked to meet at 10:30 AM at Pleasant View Baptist Church on Widener Valley Road where a tractor and wagon will carry Billy to his final resting spot at Rush Creek Cemetery with the funeral procession to follow behind him. Condolences for the family may be sent and viewed by visiting www.garrettfuneralhome.com. Mr. Thomas and his family are in the care of Garrett Funeral Home, 203 N. Shady Ave., Damascus, VA 24236; ph.#: (276) 475-3631

Billy M. Thomas, 59, of Glade Spring, Virginia passed away on Saturday, September 24, 2016 at Johnston Memorial Hospital in Abingdon, Virginia. He was born in Marion, Virginia and was a son of the late Venton Thomas and survived by his mother,... View Obituary & Service Information

The family of Billy M. Thomas created this Life Tributes page to make it easy to share your memories.

Billy M. Thomas, 59, of Glade Spring, Virginia passed away on...

Send flowers to the Thomas family.