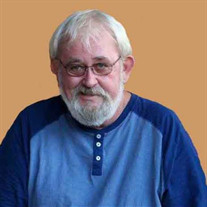 Bill Shell, 56, of Damascus, VA died on Saturday, January 21, 2017 at his home. He was born in Elizabethton, TN on March 29, 1960, a son of the late Verl and Ennis Shell. He was a native of Elizabethton, TN and had lived in Damascus, VA since 1999. He was a member of One Way Ministries and worked for Wilcall Construction and Wilson Farm for the last nine years. In his free time, he loved working with his antique cars. Billy is survived by his soul mate and companion of 18 years, Sarah Otey; four children, Wendy Gibbons and husband Dean of Piney Flats, TN, Cody Shell and wife Ashley of Bristol, TN, Ashley Otey of Damascus, VA, and Brandon Otey and his companion Dori of Oskaloosa, IA; seven grandchildren, Austin, Abby, Ethan, Katie, Rhiya, Landon, and Maddie; one brother, Teddy Shell of Hampton, TN; one sister, LeDonna Hughes and husband Joey of Johnson City, TN; special cousin, Beth Eller of Damascus, VA; and several nieces and nephews. The family will receive friends from 6:00 until 7:45 p.m. on Wednesday, January 25, 2017 at Garrett Funeral Home. The funeral service will follow in the Riverview chapel of the funeral home at 8:00 p.m. with Pastor Gary Ritchie and Pastor Gordon Taylor officiating. The committal service and interment will be conducted at 11:00 a.m. on Thursday, January 26, 2017 at Widener Valley Community Cemetery in Glade Spring, VA. Pallbearers will be Cody Shell, Jim Wilson, Adam Wilson, Alan McCall, Jason McCall, Victor Campbell, Dean Gibbons, and Donald Snyder. His special little sidekick buddies; Harley McCall, Maddie Woodard, and Landon Woodard. Those who wish to attend the committal service are asked to meet at the funeral home at 10:30 a.m. on Thursday to go in procession to the cemetery. Condolences for the family may be sent and viewed by visiting www.garrettfuneralhome.com. Mr. Shell and his family are in the care of Garrett Funeral Home, 203 N. Shady Ave., Damascus, VA 24236. (276) 475-3631

The family of Bill Shell created this Life Tributes page to make it easy to share your memories.

Send flowers to the Shell family.