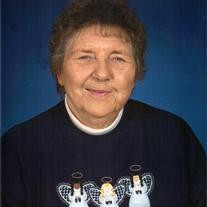 Betty Riffey Blevins, age 78, Damascus, Virginia, formerly of Konnarock, Virginia passed away Friday, December 23, 2011 at the home of her granddaughter in Damascus, Virginia. She was born in Whitetop, Virginia to the late Bill and Bessie Riffey. She had lived in Konnarock, Virginia most of her life before moving to Damascus three years ago. She was a member of Azen Baptist Church. In addition to her parents, she was also preceded in death by the love of her life, her husband, Clarence Blevins; and one daughter, Jeanette Powers.  She is survived by one daughter, Vickie Stike of Abingdon, Virginia; a son-in-law, Keith Powers of Damascus, Virginia; three grandchildren, Alanna Osborne and her husband, Jon, of Damascus, Virginia, Clay Stike of Abingdon, Virginia, and Kyle Powers and his wife, Ashlee, of Konnarock, Virginia; four great grandchildren, Laken and Leah Buchanan, Aspen Stike, and Dylan Powers; four sisters, Jessie Blevins of Konnarock, Virginia, Eleanor Baer and her husband, John, and Doris Deel and her husband, Robert, all of Glenmore, Pennsylvania, and Carol Gillenwater of Bristol, Virginia; and several nieces and nephews.  The funeral service will be conducted at 8:00 P.M. Tuesday, December 27, 2011 in the Riverview Chapel at Garrett Funeral Home with Pastors Robert Blevins, Ronnie Blevins, and Johnny Osborne officiating. The committal service and interment will be at 11:00 A.M. Wednesday, December 28, 2011 at Azen Cemetery in Konnarock, Virginia. Pallbearers will be Gary Blevins, Tyler Blevins, Kelly Powers Jr., Joey Fritz, Darryl Raines, Scott Blevins, Jim Blevins, and Joey Riffey. Honorary pallbearers will be Bill Hash, Ira Blevins, Ed Blevins, Jim Campbell, Mickey Blevins, James Huffman, James Blevins, and Keith Powers. The family will receive friends from 6:00 P.M. to 7:45 P.M. Tuesday prior to the funeral service at the funeral home. Online condolences may be sent to the family and a memorial video tribute may be viewed by visiting www.garrettfuneralhome.com. Mrs. Blevins and her family are in the care of Garrett Funeral Home, 203 N. Shady Avenue, Damascus, VA 24236, ph.#: 276-475-3631.

Betty Riffey Blevins, age 78, Damascus, Virginia, formerly of Konnarock, Virginia passed away Friday, December 23, 2011 at the home of her granddaughter in Damascus, Virginia. She was born in Whitetop, Virginia to the late Bill and Bessie Riffey. She... View Obituary & Service Information

The family of Betty Blevins created this Life Tributes page to make it easy to share your memories.