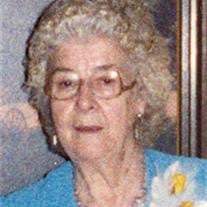 View this Videotribute Annis E. Winters, age 84, of Damascus, Virginia, passed away on Thursday, March 31, 2005, at Johnston Memorial Hospital in Abingdon, Virginia. She was a native of Johnson County, Tennessee, and was the daughter of the late Nat and Mollie Jenkins. She had lived in Damascus, Virginia, most of her life. She was preceded in death by her husband, Charles W. Winters; two sons, Hobert Winters and Albert "Tooty" Winters; and seven brothers and two sisters. She is survived by two sons, Frank Winters, of Chilhowie, Virginia, and Randy Winters, of Laurel Bloomery, Tennessee; one daughter, Evon Wilson, of Damascus, Virginia; one sister, Louise Duvall, of Mountain City, Tennessee; five grandchildren, six great grandchildren, two great great granddaughters, and several nieces and nephews. The funeral service will be conducted at 8:00 P.M. Friday, April 1, 2005, in the Garrett Funeral Home Chapel with Rev. Warren Wilson and Rev. Frank Woods officiating. The committal service and interment will be at 11:00 A.M. Saturday, April 2, 2005, at Sunset Memorial Park. The family would like to express a special thanks to the entire staff of Valley Health Care Center for all the special care and love they gave to Mrs. Winters. The family will receive friends from 6-7:45 P.M. Friday prior to the funeral service at Garrett Funeral Home. Online condolences may be sent to the family and a memorial video tribute may be viewed at www.garrettfuneralhome.com. Mrs. Winters and her family are in the care of Garrett Funeral Home, 203 N. Shady Avenue, Damascus, Virginia. Telephone (276) 475-3631.

View this Videotribute Annis E. Winters, age 84, of Damascus, Virginia, passed away on Thursday, March 31, 2005, at Johnston Memorial Hospital in Abingdon, Virginia. She was a native of Johnson County, Tennessee, and was the daughter of... View Obituary & Service Information

The family of Annis Winters created this Life Tributes page to make it easy to share your memories.

Send flowers to the Winters family.