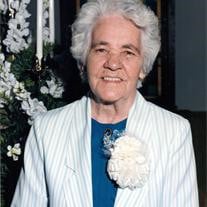 Agnes Dolinger Greer, age 95, of Lenoir, North Carolina, passed away Monday, October 11, 2010 at Caldwell Hospice and Palliative Care in Hudson, North Carolina. She was a native of Whitetop, Virginia and had lived in Konnarock, Virginia for... View Obituary & Service Information

The family of Agnes Greer created this Life Tributes page to make it easy to share your memories.